There have been some significant high-profile fires in the past few years that have caused large commercial property losses and elimination of jobs.

There was the fire at the GAP Distribution Center in Poughkeepsie, NY, where a disgruntled employee set fire to rack storage causing a major fire that impacted GAP earnings.

In Louisville, KY, a fire to a key Supplier for a General Electric Distribution Center caused major supply chain problems throughout the company.

Within this year alone there were two significant large loss fires.

In January 2019 a major fire occurred at Marcal Paper Mills in Elmwood Park, NJ. 31 of 36 buildings were destroyed. The investigation never found a cause of the fire. The plant will not be rebuilt.

On February 2019 an Ocado Andover Distribution Center in the UK was destroyed by fire. This was a “state-of-the-art facility” designed and insured by FM Global. The fire was caused by a robotic battery system called AutoStore. Contributing to the growth of the fire was an employee shutting the sprinkler valve, causing the fire to grow out of control.

Over 2,000 jobs were lost in total in the GAP, GE, Marcal Paper and Ocado fires.

According to the NFPA, a US fire department responds to a fire every 24 seconds. In 2018, 1,318,500 fires caused $25.6 billion in property damage – an 11 percent increase from the previous year. This number include structure fire losses from major wildfires in California that totaled over $12 billion while those not related to wildfire resulted in $11.1 billion. With 499,000 structure fires, or one every 63 seconds, each fire resulted in an average property loss of $22,176.

Home fires occurred every 87 seconds, in total costing $8 billion in damages – a 4 percent increase from 2017. One- and two-family homes made up approximately $6.5 billion of these losses, while the remaining $1.5 billion occurred in apartments or other multifamily housing.

Other property damage results for 2018 included $778 million in store and office properties, an increase of two percent; $508 million in industrial and manufacturing properties.

Property loss totals can change significantly from year to year.

Last year intentionally set structure fires increased 13 percent to 25,500 from 2017. These fires caused $593 million in property loss and caused approximately 350 civilian deaths. Statistics that had increased 2 and 25 percent respectively from the previous year. 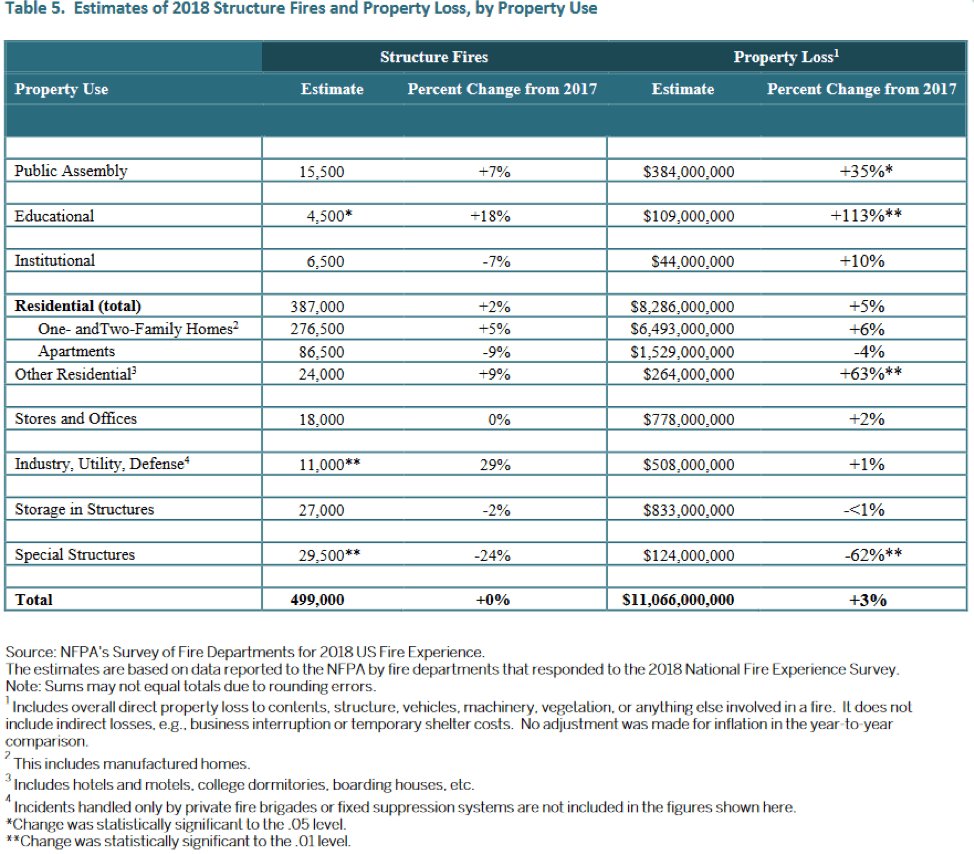 Please contact Risk Logic as we are experts in the field of Property Loss Prevention. We can review automatic sprinkler protection systems to determine if they are adequately designed for the storage that is provided in your facility.

NFPA Fire Loss in the United States During 2018