Tornadoes can cause severe property damage with squalls that can have internal wind speeds of up to 300 mph. They can be extremely destructive due to the very high pressures. The land area affected by a tornado, which touches ground can range from several hundred feet to upwards of over 100 miles in length, but typically covers a width of 200 feet to a mile and a length of 2 to 20 miles.

Below is the Average Annual Number of Tornadoes that occurred in the USA between 1991 and 2010. The data was compiled per 10,000 sq. miles and provides an annual average number of tornadoes by state. This map is provided by the National Oceanic and Atmospheric Administration (NOAA). 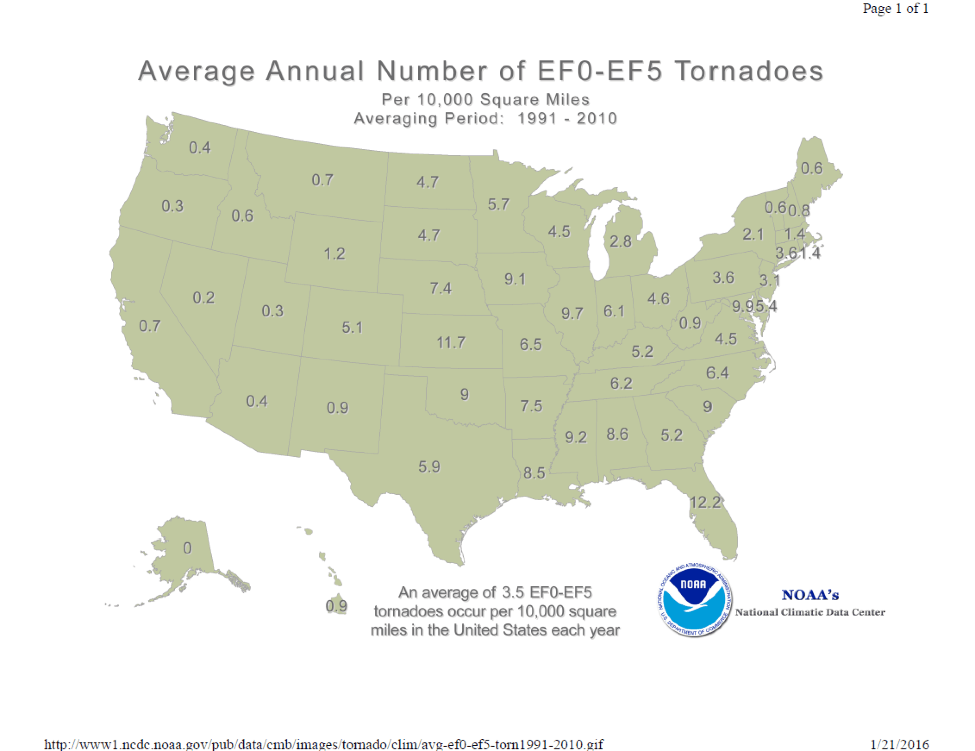 86% of all fatalities are caused by EF3 Tornadoes or greater. The following table was tabulated using 56 years of recent tornado data.

Scientists have been continually gathering data to study tornadoes as there is so much to learn about this destructive natural phenomenon. A tornado in May 9, 2016 in Nebraska and Oklahoma was studied using a GOES-14 satellite imagery where the intricate detail of the storm was captured and data was acquired every minute of the tornado. This data will allow scientists to simulate tornadoes for future real-time storm-tracking and imagery capabilities. As you can imagine this is an important development, which will aid in notifying people and businesses of the potential track of the storm.

Scientists have been performing these simulated “test runs” since 2012 with GOES-14 to periodically collect nearly continuous rapid-scan imagery. Once launched and operational, GOES-R will provide scans of Earth five times faster and at four times the image resolution than previous geostationary satellites.

In March 2015, the Federal Emergency Management Agency (FEMA) published Safe Rooms for Tornadoes and Hurricanes. This was the third edition. The focus was mainly on guidance for residential and community safe rooms. The first edition being published in 1998. There are references to the International Building Code (IBC) and International Residential Code (IRC).

One of the first steps of analyzing the risk of tornadoes is to understand the vulnerability of a potential strike based on your location. The next step would be to understand the risk of the building to a tornado and determine protection needs and prioritize mitigation activities. Clearly it is not economically practical to design an entire structure to EF3 or greater, however safe rooms are recommended for life safety purposes. As with windstorm / hurricane design, glazing is recommended for wind borne debris for tornadoes as well. Interior operated shutters for buildings or safe rooms are recommended as well.

An example of a safe room design comes from Joplin, MO which has been hit hard in the past by tornadoes. All new school safe rooms are being designed to accommodate not only the students, faculty, and staff of each school, but also the residents who live within a 5-minute walk and a 1/2-mile drive of them. Each safe room will have an average capacity of 1,000 to 1,500 people. “The safe rooms are designed for that general radius around each school,” according to Jason Cravens, Executive Director of Secondary Education. “We wouldn’t turn people away, obviously, but there was [an assumed] capacity in designing them” (Youker 2014).

Some important terminology for incoming tornadoes are the “watch” and “warning” terms. This is similar to the hurricane watch and warning terms. A tornado watch is issued when conditions are favorable for a tornado to form. A tornado warning is issued when a tornado is either occurring or is imminent based on weather radar.

A FEMA P-361 compliant safe room can be constructed in a new building and the estimated added cost to the project ranges from 5 – 32% higher than normal design and construction. The IBC or local AHJ may require a safe room be constructed in your building. A typical design would be for a 250 mph safe room design and wind speed (3 second gust). Also missile impact resistant for vertical (100 mph) and horizontal (67 mph) surfaces would be provided. UL listed doors are provided to meet safe room criteria from FEMA and the IBC for windstorm test pressures and impact resistance.

The structural design is provided in Chapter 3 of the IBC but more stringent recommendations are provided by FEMA P-361 in Chapter B3, Structural Design. There are several design approaches such as stand alone or internal safe rooms.

Design safe rooms in areas not susceptible to flooding. Also fire protection should be considered when designing a safe room.

The appendix of FEMA P-361 provides a detailed Safe Room for Tornado and Hurricane Checklist that was updated in 2015. Also provided in the appendix is a comparison between the differences of FEMA P-361 and the less conservative ICC 500 design requirements.

The map below provides a tornado safe room wind speed design. There are four zones provided. 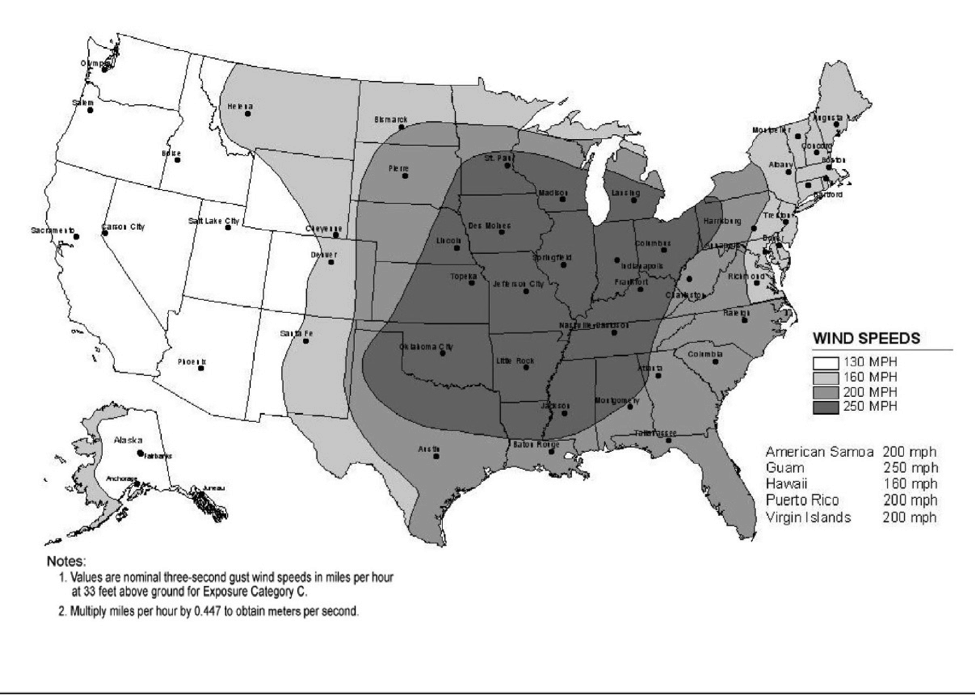 Tornadoes are a dangerous natural phenomenon that we are still learning about. Providing an entire facility to be tornado proof is usually not economically practical. However, providing a smaller room (safe room) designed to meet the FEMA and / or the IBC criteria will provide life safety protection. We hope you found this article informative.